Have you ever faced the question, is the Alpaca different from the Llama?

I think yes because many of us don't know about alpaca and Llama differences. Alpaca is a domesticated species whereas Llama is a species of wooly domesticated mammal. Alpacas and llamas are both in the camelid family hailing from South America. 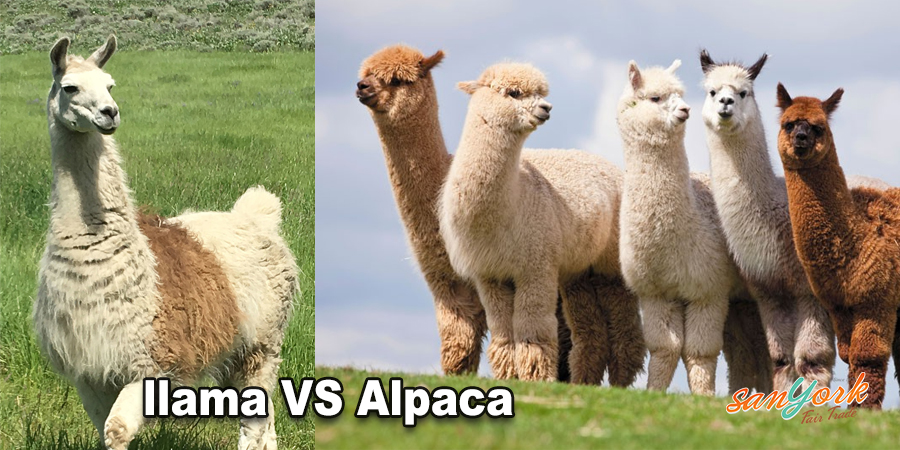 If you saw one of them you might get confused whether it is an alpaca or llama, People may think they saw the alpaca but in reality, it was a llama because they look similar. They both are productive and useful to human beings. People use their fiber, meat, and sometimes milk for their daily needs.

Here are how they are dissimilar from each others?

1. Difference of Face: Alpaca and Llama look almost alike but they have some differences in their faces. The alpaca's face is short but the face of the llama is larger in size. There is much hair present in alpacas face and head but there is no such hair in the llama’s face. Alpaca looks cute and llama looks regal.

2. Difference of Ear: There are also some dissimilarities in Alpaca and Llamas’s ears. Alpacas ears are straight, short in size and they are separated from each other. In the case of Llama, it's ear is long and carved from the front side. It looks like a banana in shape.

4. Difference of Height: Alpacas are smaller than lamas in height also. Alpaca are generally short in size but a llama is bigger in height. The llama is almost twice the size of the alpaca. A full-grown Alpaca is 32 to 39 inches long in height from toe to shoulder. A full-grown llama is 42 to 46 inches in height.

5. Difference of Fiber: Alpacas are well known for their valuable fiber. alpaca is specially bred for its single coated fiber. Its fiber is glossy, silky, soft, and breathable.

Totally natural single coated fiber, similar to sheep's fibers. Baby alpacas fiber is the most gorgeous and soft. It is very soft, luxurious, and also flame-resistant. alpaca's fiber comes in more than 52 natural colors as classified in Peru, 12 as classified in Australia, and 16 as classified in the United States.

6. Difference of Collection of fiber: In the spring season Alpacas are typically sheared once per year. Each shearing almost produces 2.3 to 4.5 kilograms (5 to 10 pounds) of fiber per alpaca. People normally shear llamas every 2 or 3 years. Each llama produces 3 or 3.5 kg fiber at once. Llama has long hair from 8 to 25 cm.

7. Their Color: The alpaca is the most colorful animal on earth who comes with the most natural shades of colors. They have 22 colors ranging from white to fawn, brown to true black, and silver-gray to dark rose gray. There is no difference between Huacaya and Suri. They physically look alike in every other respect.

8. Their Behavior: Male alpacas want to create dominance in the group. They often try to challenge the weak male alpacas to prove their strength and power.

9. Their Food habit: In their native habitat, llamas eat a wider variety of foods than alpacas. The llama eats roots, tubers, leaves, grains, seeds, plant sap, and lichens, while alpaca clings to grasses, bark, leaves, and stems. On farms and ranches, both thrive on pasture, hay, and grain.

10. Their Genetics: Recent researchers have discovered that Alpacas are linked to the vicuña, 6000-7000 years before present in the Peruvian Andes. Llama chronology in the guanaco family. In contrast to the mtDNA, these markers show the high genetic similarity between alpaca and vicuña, and between llama and guanaco.

12. Teeth: Alpacas teeth have no enamel on the tongue side of their incisors. But Llama’s teeth are fully enameled.

13. Their Personality: Alpacas and Llamas have unique personalities. Alpacas are very mild, curious, timid, and shy, while llamas are very confident and brave animals. On the other hand, Llamas can protect themselves and therefore often serve as herd guards. The Llamas are confident, independent and guard like.

14. Difference in Shape: Alpaca’s body is shorter, sloping back, in contrast, llama’s body is long and straight back.

15. Their Tail Types : Alpacas tail is sloped down from the back but llamas tail is in line with the back.

16. Human transporting: Alpacas are not bred to be working animals. But often llamas are used for human and pack animals for the transport of goods.

19. Their Training: Llamas can learn tricks easily after a few repeats. They are easily trained animals, but the Alpacas are not like them.

20 . Product: Alpaca's fiber is used to make knitted and woven items, like blankets, sweaters, hats, gloves, scarves, a wide variety of textiles, and ponchos in South America. Sweaters, socks, coats, and bedding in other parts of the world. According to National Geographic article: llama's are used for leather, ropes, rugs and hard fabrics.

21. Meat: In history 5,000 years ago, alpacas have been raised for fiber and meat. On the other hand, Llamas have been bred to transport things and meat, because they are bigger and stronger than Alpaca.

22. Baby alpaca and baby Llama: Baby alpaca is generally between 15 and 19 pounds in weight, and are standing 30 to 90 minutes after birth. 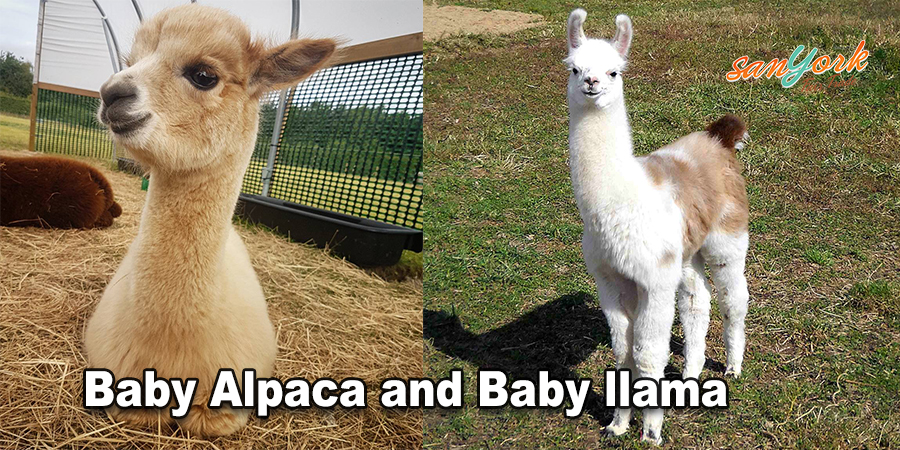 Baby Alpacas always tend to follow their mother or older Alpacas. Llama babies are up and standing, walking and attempting to suckle within the first hour after its birth.

23. Where to find them: Alpacas live in farms in the high mountains of the southern part of Peru, the western part of Bolivia, Ecuador, and the northern part of Chile at 3,500 to 5,000 meters above sea level.

24. Reproduction: Female Alpacas usually conceive after just one breeding. A male alpaca is usually ready to mate for the first time between two and three years of age. It is not advisable to allow a young female alpaca to be bred until she is mature and has reached two-thirds of her mature weight.

25. Their Mating: Alpacas mating occurs in two ways. The most popular way is pen mating. Pen mating is when they move both the female and the desired male into a pen. Another way is paddock mating. In paddock mating, one male alpaca is let loose in the paddock with several female alpacas.

27. Training: Alpacas are not often found trainable. But you can easily herd them even in large groups of numbers. Llamas are more trainable than Alpaca. They are very quick learners. They can learn tricks quickly.

28. Behavior: Alpacas are very social animals they live in families and groups. Alpaca families consist of a male, female, and young child. If their herd may attack smaller predators with their front feet and alpaca can spit and kick. Sometimes they can be aggressive but generally, they are gentle, intelligent, and well-behaved animals.

29. Guard behavior: Alpacas are nervous and easily excited animals but llamas are known as Guard animals. Sometimes alpaca breeders use llama for the protection of the farm.

30. Breeds: There are two types of breeds found in alpaca based on their fiber. two breeds are, Suri and Huacaya. Almost 90% of the alpaca population found is huacaya. They are full of puffy fleeces whose crimp or crinkle is found throughout their fleeces. They originated in post-colonial Peru. Suri Alpaca represents a small 10% of the total alpaca population. Their fleece has a lustrous, penciled fiber that hangs down which gives the Suri alpaca an entirely different look.

31. Their Sound: alpacas can make a variety of sounds, like humming, snorting, grumbling, couching, screaming, screeching. Llama makes groaning noises often it's a sign of fear or anger.

32. Breeding: Alpacas can breed at any time in the year but it is difficult to breed in the winter. They mostly breed during autumn or late spring.

33. Lifespan: in the matter of lifespan Llamas survive a little bit more years than Alpacas. The average lifespan of the alpaca is 15-20 years. Some of them survive 27 years or more.

34. Food habits or Diet: Alpacas mainly eat grass or hay. alpacas eat their food chewing and it ends with cud for the second time. They generally eat 1.5% of food for their natural growth. A 120-pound bale of hay can usually feed a group of approximately 40 alpacas for one day.

35. Their Digestion Capability: Like other camelids, Alpaca has three chambers in their stomach. They chew their food, swallow the food, and then pass it into the first stomach's chambers. The first and second chambers where the digestion process begins. The Alpaca will absorb nutrients and water in the first part of the third chamber. In the third chamber, their stomach secretes acids to digest food.

36. Medical uses: According to Wikipedia- "Doctors and researchers have determined that llamas possess antibodies that are well suited to treat certain diseases. Scientists have been studying the way llamas might contribute to the fight against coronaviruses, including MERS and SARS-CoV-2 (which causes COVID-19)."

37. Difference of their Pricing: Alpacas can be very costly. Its pricing depends on age, maturity, confirmation, fiber quality, color, lineage, temperature, behavior, personality, appearance. While overall costs can range between $250 – $50,000 per alpaca, the cost of most alpacas may fall between $3,000 – $10,000 per alpaca.

Summary of difference: Alpacas generally have better quality wool than Llamas, and their small size makes them easier to physically handle. Though some Llamas have beautiful fiber, most do not have nearly the same quality fiber as an average quality alpaca has. Alpacas are mainly grown-up for high-quality fiber whereas Llamas are for meat and transporting.

These two Camelids look similar in appearance, but there are notable differences. These two animals Alpaca and Llama have some similarities also. They can both spit on you. Llamas and Alpacas are raised for their fiber and meat, sometimes even for their milk. Llama is very good for transporting goods as well as humans.

After learning all these, what are you thinking about Alpaca and Llama? Don’t forget to share it with us.